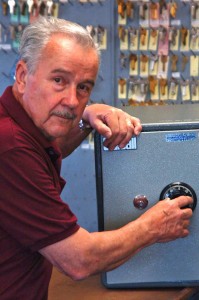 Fairport resident Bernie Rick, 78, works at Advanced Safe & Lock because he experiences such a thrill each time that he opens a safe.

“People are concerned about their valuables and protecting their family and businesses.  I enjoy helping people,” Rick said.

He discovered his passion for picking locks when he was 12 years old.  His father was a locksmith in Buffalo; he was the oldest of 13 children. By the time he was 16, he was opening safes.  “The day I opened my first safe, I knew the bug had bit me,” Rick said.

When Rick was 19, he paid to participate in a manipulation course presented by Sargent & Greenleaf in Rochester. The S&G President Harry Miller and Vice President Jim Taylor recognized Rick’s talent and approached him to open a precision safe and lock company in Rochester.

“In the 1950s, all business was conducted with cash; people didn’t use credit cards. I sold a safe to just about every jeweler, supermarket, high school and business in the Rochester area,” Rick said. “When people lost the combinations, they’d call me, and I’d open the safe for them.”

“Most of the locksmiths in Rochester today trace their roots to Bernie Rick. He either trained them or their teachers personally,” said John Mallette, vice president of Advanced Safe & Lock, Inc.

Always community minded, Rick presented Neighborhood Watch seminars to the Rochester Police Department and Sheriff’s Department for many years.  In the four-hour course, he taught the officers how long it took to crack a safe, as well as how to pick a lock. “One of my best students was a police officer who saved the life of a man trying to commit suicide, by picking a lock like I taught him.”

After selling the business, Rick and his wife, Blanche moved to Florida, where he was employed in the Financial Services Division of Allstate Insurance.

“I knew I still had safes in my blood while I was living in Florida.  Once, I went to a locksmith meeting in Orlando and told the participants to call me it they had a safe they couldn’t open.  I’d open it for them,” Rick said.  He received about a half dozen calls, including a request to open a big portable bank vault.

He moved back to Upstate New York five years ago due to sickness in his family, and, reluctantly, resigned from Allstate in Florida.  He became a day trader, but he found that boring.

He decided to find some part-time work and approached Advanced Safe & Lock, Inc., at 1459 Lake Ave. in Rochester.  This company was founded in 2005 in Webster and acquired Town & Country Locksmiths, Inc. in 2007.  Town & Country had been serving Upstate for 20 plus years. Advanced Safe & Lock’s team has than a century of combined experience locking out crime and opening safes.

“I like teaching the young guys. I want them to learn the trade. I spend a lot of time explaining how and why the work is done a certain way,” Rick said.

“At Advanced Safe & Lock, we want to attract apprentices who can learn from skilled lockmasters like Bernie Rick and Joel Snell,” said Frank Cicha, president of ASL.

Rick believes that “working keeps your mind, heart and lungs stimulated. People are meant to keep moving. It’s not okay to stand around and do nothing.”

On July 21 Blanche and Bernie Rick celebrated their 57th wedding anniversary.  He has a son and two daughters, six grandchildren and five great-grandchildren. He lives in Fairport.